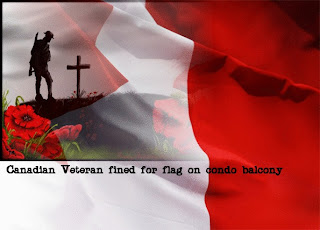 What if you were told that you weren't allowed to fly the very flag our men and women died to protect your right to do so?  W

Well that is what happened to an Edmonton, Alberta couple who were fined $250.00 for flying a Canadian Flag cone on their condo balcony.

The couple immigrated from Italy and Bill Nienhuis joined the Canadian Armed forces in 1951, he was told that the flag violated condo bylaws.  Not only that after putting up posters to gain support they were fined another $250 for littering.

Here is a note from their daughter Donna E Nienhuis :
My parents lived there for 7 years. and it was a Canadian Flag wind sock, Then after 7 years, My parents come home and there is a fine under there door for the Flag, They were given NO warning to this.Then My father was fined a other $250.00 for Trying to get support from this. Then when my father and uncle went into the condo meeting, They would NOT even address this situation! They said that they have more right's then parliament...And would not even hear what they had to say... Since this has been on Trouble Shooter, They are no where to be found... Has usually. What i would like to see is a support of people on Canada Day At there building, And proudly Sing Our Anthem. 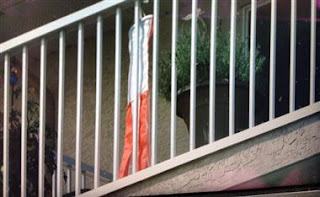 An act of patriotism has left an Edmonton couple out $250. The condo board fined them for hanging a wind sock displaying the Canadian flag on their balcony.

“I was very upset, yes,” says Franca Nienhuis, “because I am a very proud Canadian.”

The couple has had the flag on their balcony since they moved in seven years ago.

Bill and Franca Nienhuis say they hadn’t received any complaints before a letter a from the condo board arrived last June; fining them for the offence.

"A flag is part of the freedom of our country and we should be able to fly that anytime, anywhere,” says Bill.

The complex says it was against the condo bylaws. Franca’s brother Carl feels the flag is something every Canadian should have the freedom to fly.

“It shows your appreciation of the men and women who went through the war to keep us safe...isn't that a good reason?"

He brought that up to the board at a meeting, and claims board members wouldn’t reverse their decision.

The outraged family put notices under neighbours’ doors asking for support. The management company then fined the couple another $250 for littering.

“Somebody must have put it in the hallway,” explains Franca, “so he was charged for debris”

The couple decided to pay the fines because they didn’t want a lien put on their home. Still, they have continued to fight this issue.

“I would like to have an apology,” says Franca, “have my flag up there, and have my fine returned to me."

Bill and Franca feel they’ve been punished for displaying a love for their country.

“When we immigrated to Canada, we became Canadian citizens in about 1951, and then I joined the armed forces," says Bill.

The property management company responded to the Global Trouble Shooter’s request for an interview in writing, saying “The Board of Directors has reviewed your comments. At this time, they would like to make one comment with respect to these allegations: this was not an official flag, but a wind sock… The Board [President] will be happy to reply upon his arrival back next week.”

In the letters sent to the couple, the property management company refers to the item as a flag.

Technically, a flag is defined as “a piece of cloth… often attached to a pole or staff, decorated with a design and used as an emblem, symbol, or standard or as a means of signaling… a small paper flag, emblem, or sticker sold on flag days.”

A Private Member’s bill (Bill C-288 – the Canada Flag Act) has been introduced in Parliament that will ensure Canadians have the right to proudly fly the flag. It’s currently in its third reading.

"I'm rather appalled that somebody would make an issue out of somebody who wants to have a flag," says Goldring.

"A flag is a symbol of our country and more people should be encouraged to have this symbolism and to show it."
With files from Julie Matthews